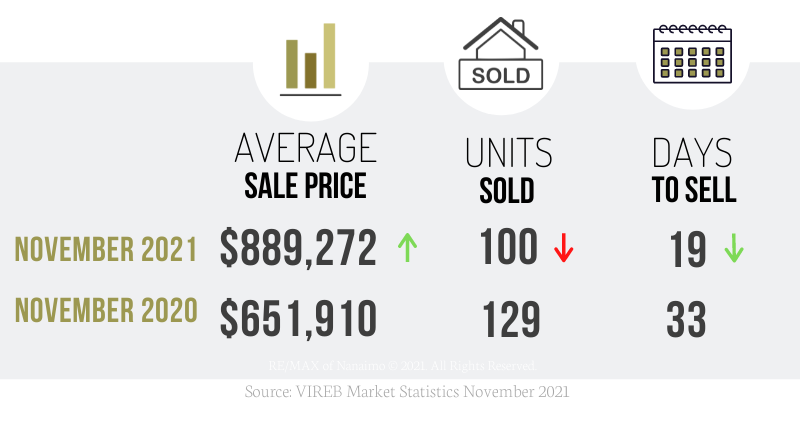 By category, 353 single-family homes sold on the MLS® System in November, a 16 per cent decrease from one year ago. There were 110 condo apartment sales last month compared to 107 one year ago and 122 the previous month. In the row/townhouse category, 98 units sold compared to 90 the previous November and 88 in October 2021.

According to the British Columbia Real Estate Association, the supply situation is especially critical in markets outside the Lower Mainland. One of the worst inventory situations is on Vancouver Island. Even if sales were to return to long-run average levels, total listings would need to nearly double to achieve a balanced market, and the road to doubling those listings lies in building more homes.

VIREB welcomes the news that the Government of British Columbia is giving local governments more tools and powers to simplify and speed up their development approvals processes. The changes announced
by the government include removing requirements for local governments to hold public hearings for development proposals that already align with Official Community Plans and equipping municipal staff to make decisions for minor development variance permits.

“Increasing housing supply isn’t a simple solution. It requires a coordinated effort from all levels of government and adequate incentives for municipalities to take action,’ says Ian Mackay, 2021 VIREB President. “Homes need to be built in a reasonable time frame at a reasonable cost, and it cannot continue to take years to get a development off the ground. The public also has a role to play in being open to gentle densification in some areas.”