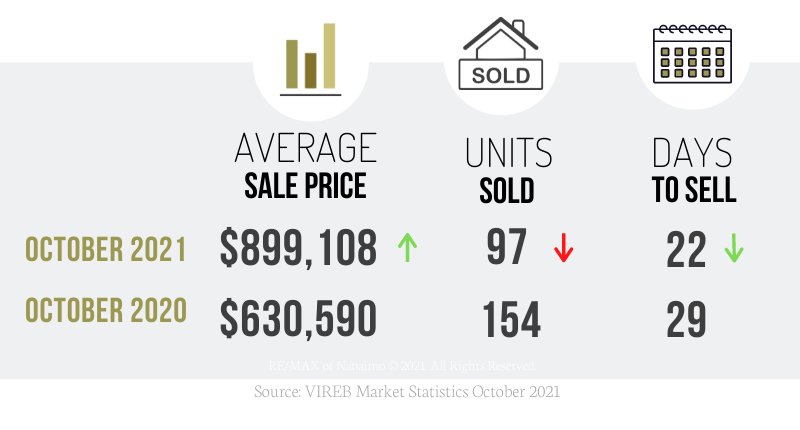 DIFFERENT MONTH BUT THE SAME ISSUES CONTINUE
The predominant theme running through the housing market in the Vancouver Island Real Estate Board (VIREB) area is one of “different month, same issues.”

By category, 398 single-family homes sold in October, a 23 three per cent decrease from one year ago. There were 122 condo apartment sales last month, a six per cent decrease from October 2020. In the row/townhouse category, 88 units sold compared to 98 the previous October. However, there is little doubt that a dearth of active listings is causing the sales decline.

In its most recent housing forecast, the British Columbia Real Estate Association (BCREA) stated that the supply situation is especially severe in markets outside the Lower Mainland, including Vancouver Island. Listings activity has been lacklustre, and even if sales come back down to long-run average levels, total listings would need to nearly double to bring markets back into balance. The road to doubling those listings lies in increasing the housing supply.

Mackay welcomes the news that the Government of British Columbia is giving local governments more tools and powers to simplify and speed up their development approvals processes, helping to build the homes people need more quickly.

“Real estate is all about supply and demand. New construction isn’t a quick solution, but it’s the only one that can address the housing shortage, and, hopefully, temper prices,” said Mackay.